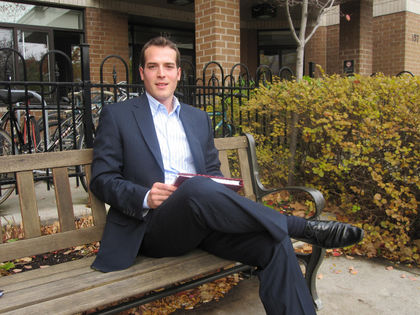 It appears Mathieu Fleury, the upstart swimming instructor who worked hard to win the ward of Rideau-Vanier in 2010 and oust longtime politician Georges Bedard, is well on his way to becoming the new MPP for Ottawa-Vanier.

And he has outgoing MPP and former cabinet minister Madeleine Meilleur to thank for that. In this community, her endorsement is considered gold.

Can’t think of another local politician whose word and actions are so well respected. In fact, just try to find someone who speaks ill of her.

And she’s now giving her stamp of approval to Fleury.

“Mathieu will be the normal replacement. There are so many files we’ve worked together on. It’s been such a nice experience and it’s time to pass to other generations,” she said.

After close to 25 years in public service, starting with Ottawa city council and culminating as the attorney general of Ontario, Meilleur recently announced she’s leaving politics.

Not entirely surprising. Ontario Premier Kathleen Wynne had made it clear she was looking to put a new face on her cabinet. Meilleur — of her own volition — decided the timing was right.

Her last day as the MPP for Ottawa-Vanier is June 30.

And the always well-dressed Meilleur is now ready to pass the torch to Fleury.

“It’s up to him if he wants to run, but it would be a normal progression. He’s great, but he has not made up his decision. Knowing Mathieu, it would be a very exciting job for him,” she said.

“I saw him growing. He came in and had a good judgment of the public. I’ll work with him, help him out. I’m a mentor, that’s what I do, “ Meilleur said.

So yes, it would appear, if Fleury wants the job, it’s his.

And let’s face it, if you’re a Liberal in Ottawa-Vanier, this isn’t an opportunity that comes around often.

Meilleur has held the riding for the last 13 years.

Fleury is still hedging his bets, but on paper he’s the perfect candidate. He knows the issues, he’s young, he’s bright, he’s fluently bilingual — and he’s shown he can tackle a steep learning curve.

In an interview with the Sun on Wednesday, it seemed abundantly clear he wants the job.

He’s overwhelmed by the opportunity and by the support of Meilleur, whom he describes as a mentor. And he touches his heart when talking about her support.

He’s also reached out to the new attorney general, Yasir Naqvi, for advice.

“I wanted to talk to him about the job and having a family — he has a young family and I really want that too,” he said, still earnest and honest enough to lay (most of) his cards on the table.

But he’s grown leaps and bounds.

As Fleury debates the inevitable, Meilleur is coming to grips with her new reality outside of politics.

“It was a kind of last-minute decision. I was thinking about whether I should continue for another two years or should I leave. My husband was sick lately, he’s OK now, he’s perfectly OK.

“But I’ve been away in Toronto for 13 years, living in Ottawa-Vanier just part-time. I’m very pleased with my accomplishments and I’m about to celebrate 25 years in politics. It’s been a nice time. But I still have a lot of energy and have a contribution to make. I’m excited about what lies ahead.”

No date has been set to choose a new Liberal candidate for Ottawa-Vanier.

Need further proof Fleury is about to take the plunge?

Popular on The Canadian

We welcome your comments toward Montreal Rd's rejuvenaton -